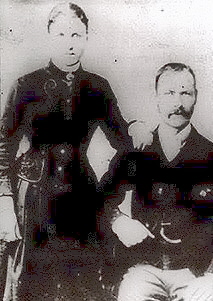 Bridget and her husband Michael

Bridget Boland was born at Ballyvadlea, between the towns of Drangan and Cloneen in County Tipperary on 19th February 1867. She was the youngest child and only daughter of Patrick Boland and Bridget Keating. She attended Convent School in Drangan and was later apprenticed to a dressmaker. On 6th August 1887, she married a local cooper [barrel-maker] named Michael Cleary, after which she worked successfully as a dressmaker and egg seller. The couple remained childless and Bridget was recognized to be an unusually independent woman for this era in rural Ireland.

After her mother died in 1894, Bridget developed a habit of visiting the so-called fairy forts in the district. Local superstition named such places as haunts of the fey folk. Perhaps Bridget was seeking supernatural help to overcome her infertility.

Bridget became severely ill on 6th March 1895. Her headache, fever, and congestion were diagnosed as bronchitis by the local doctor, but family members thought that her lassitude indicated a clear case of fairy stroke. Michael Cleary, in particular, became convinced that his wife’s spirit had been stolen by the fairies.

As a consequence, for the next nine days, Bridget was forced to endure the rigours of a secret fairy trial. Bridget’s family and neighbors confined her to the house, and then doused her with urine and hens’ dung to keep the evil fairies away. Next, Bridget was force-fed all manner of odious potions and dry herbs. At the peak of the “trial,” Michael scarred his sickly wife with red-hot fire brands in an effort to force the occupying fairy within Bridget to release her good spirits, and enable her to make a recovery. The wicked fairy was not to be overpowered, and retaliated by weakening Bridget even more.

In the predawn hours of March 16th, Bridget was dressed in her best clothes and taken before the hearth where her husband doused her with lamp oil and burned her to death. Bridget’s body was then wrapped in a sheet and buried in a shallow grave in a bog ditch little more than 1000 yards from the Cleary cottage. The body was discovered five days later and a coroner’s inquest was held. Nine of Bridget’s family members were arrested on charges of murder. The subsequent trial became a religious and political showcase in which different parties attempted to quash potential Home Rule for Ireland by denigrating the whole population as superstitious primitives. Prominent Catholic churchmen who attempted to defend the actions of a grief-stricken family were duly rounded on and made a laughing stock as supporters of supernatural nonsense. “What is the difference in believing in God and his angels, as opposed to the Devil and his demonic fairies?” This was the national argument in the Spring of 1895. 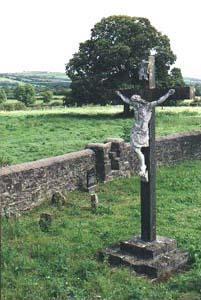 Bridget’s body, unclaimed by her incarcerated kin, and untouched by the local RC church reluctant to associate themselves with a scandal so steeped in superstition, was quietly buried one evening by two constables just outside the churchyard wall at the Drangan and Cloneen Parish Church, not far from her mother’s grave within the Holy Cemetery.