If you’ve read “Where’s Merrill?“, then let’s see if you were paying attention.

If not, just guess – but at least one of the answers is on this blog.

If asked to name some places where the infamous American mobsters of the 1930’s plied their illegal trades, most people would probably refer to New York and Chicago – and they would be quite correct because these great cities have been used as the glamorous backdrops for many gangster movies and stories featuring real-life criminals from that era. However, one US city is rarely mentioned when tales of crime capers of old are regurgitated for our general entertainment. Perhaps understandably, until quite recently, the current governors of this particular city preferred “no publicity” on this score, in order to attract new investment and to maintain its new-found clean environment. This city is St Paul in Minnesota, arguably the most dangerous metropolitan area in America in the 1930’s, and which just happened to be one of the last places on earth to where the elusive Merrill Harrison can be traced in this decade. The liberal-minded modern citizens of St Paul are now proud to boast that they live in the former “Poison Spot of American Crime”, a tagline created by leading politicians from New York City in the Depression era – and these guys had gang leaders Lucky Luciano and Bugsy Siegel on their own doorstep.

If you think that my description of St Paul back then is exaggerated, then consider some of the names who were known to frequent the city at the same time as our Merrill. You will have heard mention of some of these scary characters before, but you don’t have to be an expert in historical crime to figure out that this lot were an unpleasant bunch just by reference to applied monikers. The list of outlaws includes Machine Gun Kelly, Creepy Karpis, Babyface Nelson, John Jackrabbit Dillinger and of course Ma Barker, who (some say) was the meanest of them all and the mother of the four Barker Boys, a whole new generation of hoodlums. A fair chunk of the FBI’s Most Wanted list of Public Enemies chose to make St Paul their home.

It was the formation of the illustrious Barker-Karpis Gang in the side streets of St Paul which provides one verifiable link between Merrill and the mobsters in the native city of his first wife. You could argue that it’s a tenuous association, but it is a connection to a shady underworld nonetheless. We know that Merrill was related to wealthy “Aunt Edith” Forster through his first marriage, and we discovered that Edith’s last residence was 671 Greenbrier Street in St Paul. During the grim 1930’s, this address featured in an audacious crime which sent headlines around the nation.

In the summer of 1933, William Hamm Jr, the multi-millionaire heir to the city’s Hamm Brewery empire, was coolly kidnapped in broad daylight as he strolled between his workplace and his mansion home, the big house on the hill with the formal address of 671 Cable Avenue, later re-assigned as 671 Greenbrier Street. Creepy Karpis was driving the car into which Hamm was shoved, and Dock Barker placed a pillow-case over the victim’s head as he politely asked Hamm to lie down on the floorboards of the gang’s Hudson automobile. A day later, a brewery manager received a ransom demand of $100,000 for William Hamm’s safe return. The corrupt police chiefs of St Paul were slow to react, and the Hamm family sorted things out for themselves. The brewery boss was back home in his hilltop mansion four days later, and the Barker-Karpis Gang were a hundred grand richer. 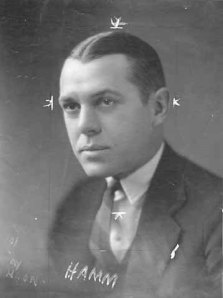 Speculative arrests of small-time crooks were made, but each villain was acquitted due to lack of evidence of involvement in the kidnapping. The Hamm caper must have been considered so successful that Ma Barker’s boys outrageously repeated the crime six months later. This time they nabbed a millionaire banker named Bremer who belonged to the wealthiest family in St Paul. Through his father’s marriage, Bremer also happened to be in the Schmidt dynasty of local industrial brewing giants. Again the police stood back, and the kidnappers were always curiously one step ahead of the Schmidt family’s private investigators. Another cleverly-planned handover of cash reportedly swelled the coffers of the Barker-Karpis Gang to around $3 million, gathered in little over two years during the mid-1930’s. Perhaps they were trying to outdo their bank-robbing pal and often fellow-citizen John Dillinger who violently “withdrew” over half a million dollars from Midwest banks almost single-handedly, during the very same era.

The lawlessness of St Paul at this time even attracted the considerable wrath of President Roosevelt. His personal friends were being kidnapped and the law enforcers appeared helpless. It took a while before the FBI detected that the high-ranking police officers of St Paul had enormous bank balances which could not be justified from their salaries alone.

So – this was the scene at a time when Merrill was in a big financial mess, and dodging around the Twin Cities of Minnesota. We know for certain that the gangsters knew exactly where the thrifty offspring of German immigrants, like the Forsters, lived and worked in St Paul, and we know that they knew how to extort money from these ultra-wealthy families. And research indicates that before 1940, the Hamms from Greenbrier Street vacated their eerie mansion overlooking the brewery with all its bad memories, and for reasons not fully understood a certain “insane” Aunt Edith then takes up residence at this landmark house. The surviving Forsters must have been acquainted with the socially-elite Hamms, and probably the Schmidt and Bremer families too.

The Hamm mansion was destroyed in a fire in 1954, but Aunt Edith’s tragic life of isolation had ended three years earlier. Why did she live in the reputedly haunted house on the hill? Was it a nursing home, or a high-class prison for Aunt Edith?

Maybe a local historian can help answer these questions. All information welcomed.

More info about St Paul in the 1920’s and 1930’s is attached here in this excellent article by Paul Maccabee: St Paul Gangsters

And here’s a typical US newspaper front page from 1933 reporting on events in a faraway Midwest city which was rapidly gaining the reputation of becoming America’s “major” crime capital: 1933 Hamm kidnapping

The Hamm Mansion in all its glory.

The creepy house on the hill, overlooking the Saintly City.