It is both commendable and crazy that I and a few other genealogy super-sleuths have been searching for Merrill for a whole five years now. Why bother? Well – the case of Merrill’s mysterious disappearance 80 years ago and the consequential investigations in the 21st century do provide hope for family historians still searching for more mundane snippets of info to bolster their Family Tree.

Just this week, I discovered Merrill’s middle name for the first time. I always knew the initial – E. I will not disclose the name or research source, just yet (because it’s not in the Where’s Merrill? book), but I was rather disappointed by the name after years of speculation and theorizing. I had guessed that the name had Biblical connotations which didn’t suit Merrill’s thoroughly modern lifestyle in the 1920’s and 1930’s – hence he kept it secret from everyone, at work and in social circles. Something like Elijah or Ezekiel came to mind; a name that a Christian regular non-attendee at church might like to hide in Midwest business boardrooms and bars.

Anyway, the choice of a child’s name says more about the child’s parents than the poor youngster-cum-adult who has to live with the moniker into old age …. normally. A second discovery this week was a photo of Merrill’s father taken not long before Merrill “disappeared.” It prompted me to compare it to the earliest photo I found showing William Harrison, father of Merrill. Both of these are shown below. 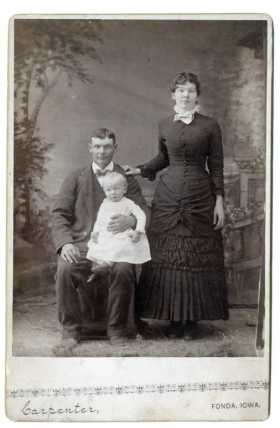