Other European tourists made tours round Ireland even earlier than John Barrow in 1835. Almost 60 years earlier, an agricultural reformer from England called Arthur Young completed his “Tour in Ireland” in 1776 in preparation of a book of that name. Arthur wanted to see how the Irish natives ran their farms. Sometimes he was impressed (in the wealthier east of the country) and at other times, like most visitors to the west of Ireland back then, he was alarmed by what he saw; uneducated and poverty-stricken peasants living in primitive cabbins AND paying premium annual rent to Anglo-British landlords for the privilege of remaining at their ancestral homesteads.

For any budding builders or DIY enthusiasts, as an accomplished artist, Young even drew sketches of traditional Irish cabin homes and showed us how they were constructed. So if you want to buy a cheap plot of Irish land out west and build your dream 18th century authentic cottage, here’s how you go about it: 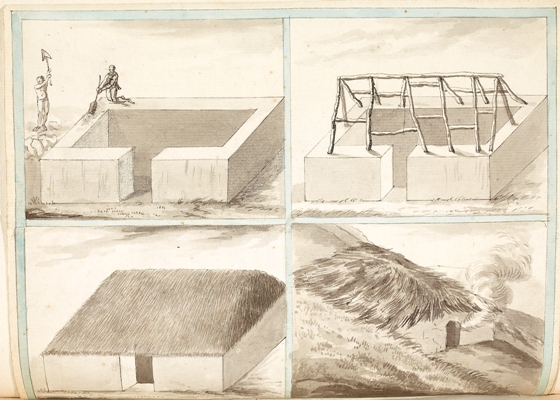 Construction of an Irish cabin (in 4 easy stages)

And here’s what Arthur Young observed:

“If the Irish cabbins continue like what I have hitherto seen, I shall not hesitate to pronounce their inhabitants as well off as most English Cottagers. They are built of mud walls 18 inches or 2 feet thick, and well thatched, which are far warmer than the thin clay walls in England. Here are few cottars without a cow, and some of them have two. A bellyful invariably of potatoes, and generally turf for fuel from a bog. It is true, they have not always chimneys to their cabbins, the door serving for that and window too: if their eyes are not affected with the smoke, it may be an advantage in warmth. Every cottage swarms with poultry, and most of them have pigs.”

Of course, Arthur failed to appreciate that the pet pig roaming around the cabin was also a great source of warmth, particularly on a chilly night when cuddling up to the snoring swine was of great comfort. 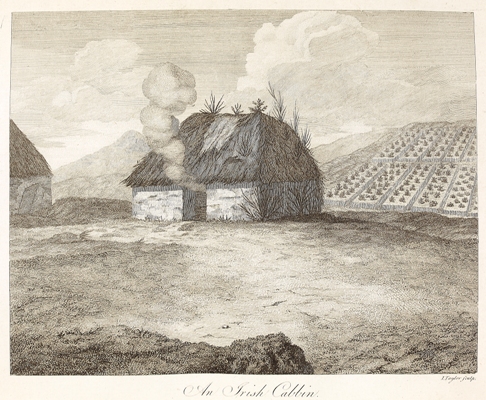 Here is an eighteenth century Irish Cabbin that some hardy buck produced earlier, prior to the introduction of chimneys into rural Irish architectural designs.

A few years later in 1790, a Frenchman named Charles-Étienne Coquebert de Montbret took his tour of Ireland while working as a commerce agent in Dublin. Charles-Étienne was fascinated by the culture of the west of Ireland and marveled at how its native inhabitants endured hardship without complaint. Charles-Étienne also made his own sketches of unfamiliar sights observed, and wrote accompanying texts in the French language. Below, I have reproduced one such article kindly translated by NUIGalway. 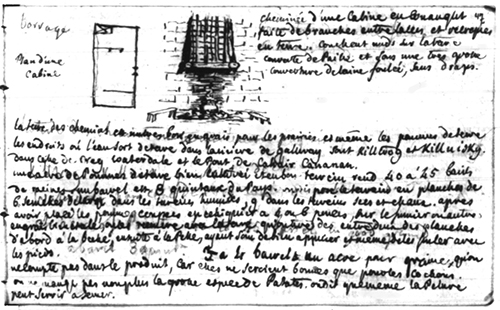 Floorplan of cabin and sketch of hearth with pot and crane

Translation: “For 5 guineas, one can have a cabin with three rooms, i.e. the kitchen and two behind the fireplace, one for the potatoes where they receive the smoke which preserves and improves them, the other for sleeping in. Only those intended for sowing are kept in earth. The Irish eat a little herring with their potatoes. One is enough for an entire family. One can buy 3 for one sol (penny). Potatoes are measured by the stone, weighing 16 pounds. They are cooked over a very hot fire, in an open pot, with little water; when they are cooked the water is drained off and they are put to dry beside the fire.
A cabin costing 2 guineas has no fireplace. It costs 5 to 6 shillings to have a stonemason build one of these cabins. Their outer face is of bare stone, the inner is rendered with earth and sand from the road. They are roofed with sods laid on a herringbone arrangement of lats, the thatch pinned into it with other thin lats and often held in position with ropes and weighed down with stones. They sleep naked on the straw which covers the floor, under a very large blanket of felted wool, without sheets.”

More desirable properties viewed and commented upon by John Barrow in County Mayo in 1835: 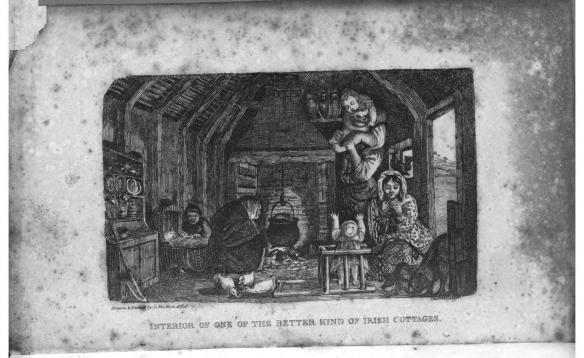 “Even while the small farmer is able, from his surplus produce, to pay his rent, his condition is far from enviable, but might with a little management be improved. If he can afford to keep a cow and a pig, he generally admits both to be partakers of the same apartment; and though his cottage may be a degree better than that of the labourer, yet it is kept equally filthy; everything within it being soiled with smoke and soot, and the puddle and the dunghill invariably found before the door. The rent of such a cottage, if built by the landlord, may be about £2 a-year; turf, 30s.; the man’s clothing 40s.; the woman’s 30s.; and four children, say 30s.; making altogether £8 10s. The rent, say of three acres and a cow-grass, £9. The routine of his crops is, potatoes, barley, and oats. The barley is sold to be distilled into whiskey, and this and the pig contribute to the payment of rent and fuel; and the potatoes, the cow, and the oatmeal, supply the family with food. The females are employed in spinning linen and woollen yarn, and in knitting worsted stockings; of the woollen yarn is manufactured a kind of frieze, druggets and flannels, the common wear of the peasantry: after supplying the family clothing, the surplus helps to pay the rent.” 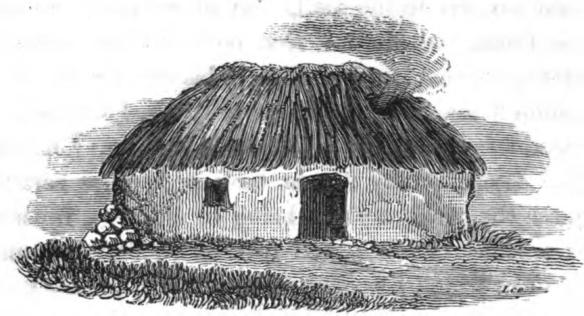 “Ballaghaderreen is the end of the first stage, and our road to it was by French Park, so called, I believe, after the family to whom the property belongs, I saw little or no cultivation, and the cabins I passed were for the most part wretched mud hovels, many of them worse than I had yet seen in Donegal or Fermanagh.
The whole country wore a sad appearance of poverty; and yet, on driving into the above-mentioned little village with a long name, I was much surprised to find the street full of people attending the fair, all well dressed, the men, generally, in light gray-coloured coats of home-manufactured frize, with large metal buttons; and the women wearing large cloth cloaks with hoods covering the head, some of which were thrown back, and displayed a clean, tidy-looking muslin cap.”

Farther on, after heading west ….

“The country we now passed through was wretched in the extreme, and the land bore a very stony and barren appearance, except where we came upon an enormous extent of black bog, whereon was not a blade of grass or any living thing, animal or vegetable, for the eye to rest upon. This bog was infinitely the largest I had hitherto seen. The cabins, which were wretched-looking hovels, were generally built of stones loosely heaped together, without mortar or even clay. You must not suppose they were either Cyclopean, Pelasgic, or Etrurian, though, like the latter, they were polygonal, but composed of such polygons as nature or accident had made.
Some of the inclosures of the fields were of the same construction, which is of so convenient a fabric, as to render any kind of gate unnecessary, an article of rare occurrence in Ireland. If a cow or cart is to be driven in or out, it is only by pushing down a gap in the wall, and piling up the stones again in any fashion. Altogether, this part of the country presented a more general appearance of poverty than I had hitherto met with; and the turf dykes, clay ditches, and stone walls, did not contribute to improve a view, which in itself was sombre and melancholy in the extreme.”

Extracts from John Barrow’s book “A Tour Round Ireland” published in 1836.

In 1961, Lily Parker toured Ireland with her family and camera, capturing 61 images of Irish coastal sites in colour. A similar tour was carried out much earlier by John Barrow, a draughtsman, in 1835. This bewildered tourist was able to create sketches of some of the strange sights he saw, to accompany his comments in text. On returning to England, Barrow employed James Lee, a renowned wood engraver, to prepare his sketches for publication in a travel journal as engravings. The resulting book, published in 1836, was titled “A Tour Round Ireland.”

Here are some images and observations from when Barrow passed through north County Mayo. 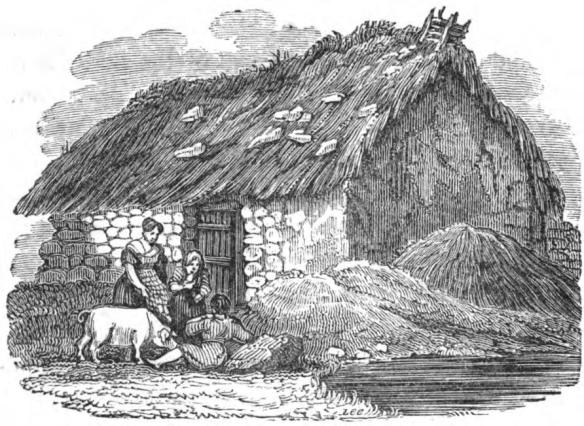 Hovel near the foot of the Reek

I had here [the quay near Westport] the pleasure of making an acquaintance with Captain Shallard, chief officer of the Coast-guard Service. In taking a drive in his car to the foot of the Reek (as Croagh Patrick is familiarly called), we passed some of the most miserable hovels that I have yet seen, even in the flats of Mayo,—so bad that, without having convinced myself of the fact, I should scarcely have supposed them to be the habitations of human beings, but rather as sheds for the cattle, the more certainly so, had I seen the head of a cow, or some other four-footed beast, peeping out of the doorway, which I understand is no uncommon occurrence. Many of these cabins are built of stones, loosely heaped together, with no window; and the only place for the light to come in at, and the smoke to go out, is through a small hole in the miserably-thatched and sometimes sodded roof, at all times pervious to the rain, and through the doorway. No picture drawn by the pencil—none by the pen—can possibly convey an idea of the sad reality. The inmates, as may be supposed, are wretchedly clad in rags and tatters, and the children almost in a state of nudity.

Barrow had an interest in architecture and he referred to the cottages he saw in Mayo as “stone cabins” and put them into three categories: better, common and worst. The “hovel” shown above was obviously considered to be in the worst category primarily because it had no windows. Note how the thatch on the roof was kept in place by a series of basic anchors, namely lengths of rope with heavy rocks attached to each end. I witnessed this ingenious way of keeping a thatched roof attached to a house as recently as the year 2000 when I first saw the ancestral Neary homestead in Tullinaglug, County Sligo. Dear old John Neary used modern breeze blocks for his roof anchors … but he only slung them over the roof when a storm was forecast. This meant that the blocks were in place for the majority of the year in the west of Ireland, and only removed for the short Irish summer! 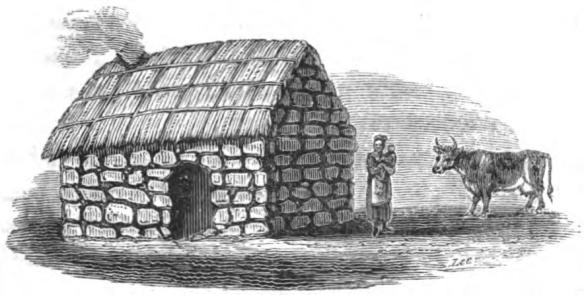 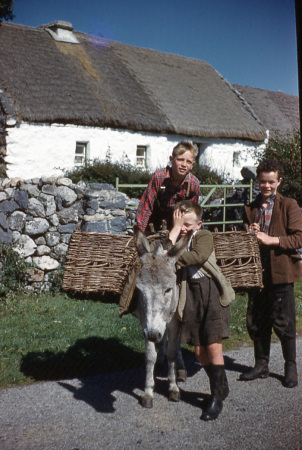