The photo above featuring my father always caused amusement and curious interest when it was viewed in the family photo album, particularly after his untimely death at the young age of 54. The snap was christened “The Good, the Bad, and Dad” by his irreverent sons, more in recognition of their liking for Spaghetti Westerns than any comment on my dad’s colleagues. You see, my dad is on the right, and we don’t know the identity of the other two young men. We don’t even know where the photo was taken, except that my Irish dad was conscripted into the Royal Navy upon resettlement in England, and he once told tales of sailing around the world, with stop-offs on exotic islands in SE Asia. Perhaps this photo was taken in Borneo, or somewhere like that.

So we don’t really know if the tall handsome man on the left was “Good” or if the shorter streetwise lad in the middle was “Bad” – but thankfully we do have a single picture of Dad as a cool-looking bachelor boy exploring the world. I have learned from interviews with Dad’s old Irish school-friend, Eddie Moran, that my father was an accomplished horseman. My grandfather Ned Neary kept horses and donkeys at the old farm in Tullinaglug, and Eddie and my dad rode them bareback-style whenever Ned was occupied elsewhere.

My dad’s life was not fully appreciated until he was gone. His strife involved escaping from poverty in rural Ireland, living in a tiny run-down old two-roomed Irish cottage with a thatched roof, but Dad ended up providing a spacious six-bedroomed detached house with attractive gardens for his large family, of which I am one. Not a bad return for a poorly-educated manual worker … and he saw more of far-flung Asian destinations than I’ll ever see.

The short poem written on to the image is courtesy of Linda Goetsch, a fellow genealogy fanatic. “Remember Me” is rapidly becoming the genealogist’s equivalent of the Lord’s Prayer. The words just seemed 100% appropriate to accompany The Good, The Bad, and Dad.

There can only be one explanation for the unsavoury behaviour displayed below.

Yes – the genealogy pox virus is getting out of control. A recent survey of the most searched-for keywords on the internet concluded that genealogy is the most popular hobby in the world – according to Google robots assessing our every move, of course. I don’t suppose that Google et al have devised a way to tell whether lovers of the great outdoors, or regularly active sportsmen and women, etc, like their pastimes more than bashing away at a computer keyboard.

Regardless, I am not ashamed to admit that the never-ending search to fully understand why I exist, and why I live where I do, and why I am like I am – and more importantly – why I should be so grateful for my comfortable existence – occupies my mind every day.

A passionate successful genealogist exhibits a warm, empathetic glow as he or she observes the travails of less fortunate souls. This is WISDOM.

Enjoy your illness – if that is what it is.

It was Chico Marx who came out with this memorable play on words, way back in 1935 in the Marx Brothers film “A Night At The Opera.” Chico was playing his usual street-wise Italian-American immigrant character when conniving Groucho asked him to sign a contract containing a “Sanity Clause.” In Chico-speak, the full reply was:

“You can’t a fool a me; there ain’t no Sanity Clause”

Decades ago, mental illness was not understood, and thus assessed and treated in bizarre ways. There is still lots to learn about brain diseases and their triggers, but thankfully the general condition is now accepted as biological fact and not some sign of weakness of character. Without wishing to belittle the sufferers of modern-day mental illness (or their admirable carers), I found the detailed analysis of the inmates of a Lunatic Asylum in 1882 [shown below] to be both amusing and illuminating.

In 1882, only a quarter of this selection of institutionalized mental patients died in their sanatorium; a better survival rate than hospitals of the day dealing with chronic diseases. And this study group stood a better chance of recovery than their peers diagnosed with purely physical symptoms in the Workhouses. Madness? Even the Victorians knew that mental ailments were not contagious. Perhaps it was wiser to feign insanity than to be incarcerated alongside really sick people … a bit like the Public Health Service today.

If you or an ancestor have one of the more commonplace Irish surnames, then you’ll probably find it on this map … and get a big clue about where in Ireland your ancestry research might lead. 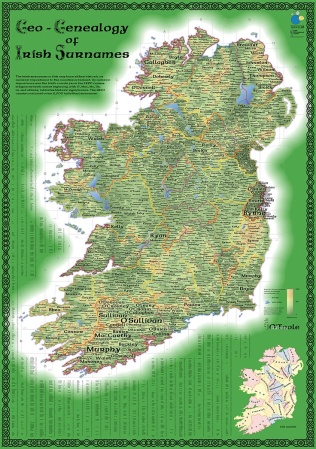 Maybe the search for Merrill will never end …

It is appropriate that I am writing this post about my Irish cousin John Neary on one of the days of early February. The precise date is irrelevant. The conflicting facts are:

This conundrum is a recurring theme in Irish Ancestry Research which I have to explain over and over again to inexperienced family historians. Why do our Irish ancestors have one date on their birth certificates and (more often than not) other dates that they claim are their true birthdays? Unfamiliar amateur researchers often whine that they cannot find a birth cert which matches their ancestor’s known birthday from passed-down family lore. Or, on the contrary, they reject indisputably correct birth data because they have retrieved a birth certificate which displays a specific birth date in black and white, and therefore it cannot be challenged …. or can it?

The reason for the conflict is surprisingly quite simple – and it is a phenomenon which continued into the first half of the 20th century.

When an Irish Catholic baby was born in rural Ireland, the priority was to get the child baptized pronto before any illness threatened its chances of surviving into infancy and beyond. And I mean quickly, e.g. typically within 72 hours of birth. The reasoning was that Roman Catholics believed that no-one could enter Heaven unless they were baptized. If a non-christened baby died a day or two after delivery, then it was sent to “Limbo” – and a poor mite in limbo was not in Hell but could never reach Heaven. So a RC baby was baptized in a hurry, and a small fee was paid to the parish priest, and baby’s head was wetted in the church, or wherever convenient, and again by the proud parents at home, or in the local pub. And that was that – job done.

Then, a few weeks later, someone would remind the Irish parents (anytime after 1863!) that the British rulers now demanded that the baby’s birth must be registered with the local Civil Registrar, and for this nonsensical burden, the poor parents would be charged another fee. The birth registration was often postponed until funds were raised, or the proud parents were threatened with a court appearance plus fine for non-registration. Next, one parent was tasked with heading into town to find the Registrar’s Office, and this could be a major (costly) journey if the town was 10 or 15 miles away. Usually the father “volunteered” to carry out the despised process on the town’s next market day, or maybe the one after. Perhaps he could sell some livestock to pay for a darned birth certificate.

And so it came to pass, after a considerable interval of several weeks stretching to months, that Dad ventures into the Registrar’s Office to declare that his wife’s delivered his fifth or sixth or seventh (etc.) son or daughter. Dad might remember the correct child’s name – but not always. He almost certainly could not remember the exact birth date of his latest progeny … and didn’t really care, so long as the child’s name appeared in the holy baptismal register back at home. Most of these dads from the rural farming community were ill-educated, and one can imagine that a wild guess at a birthday was narrowed down to a particular period between notable events such as Holy Days, depending how conscientious the underpaid Registrar was. The result of all this haphazardness was that (usually) Dad came home with a birth cert showing something like the name of the family’s latest addition alongside an arbitrary date demanded by an unloved official representing the government – not the sacred church. To compound matters, this unwanted certificate was screwed up and hidden in a drawer, never to be used again … because a Baptismal Certificate had a much higher importance in any Catholic household of old.

Now it starts to make sense. This is why many Catholics use their date of baptism as their DOB. This is why DOB’s on ancient Irish birth certs are (more often than not) completely misleading. This is why you can have an Irish ancestor who was apparently baptized before he was born! Always try to inspect the original baptismal register entry featuring your Irish ancestor and TRUST the info gleaned – above fancy-looking birth certs, or conflicting census data, or any other despised official document.

John Neary says that he was baptized in mid-February 1924, and so he adopted 14th February as his birthday (if asked). However, he never celebrated his birthday until he was in his ninth decade. He and his family could never afford to. Not many Irish farming families could. How can a poverty-stricken RC family throw 12 or 14 parties a year for their offspring. And so, sadly, birthdays are ignored and forgotten about. They are more important to genealogists and descendants than they ever were to our actual Irish ancestors.

John Neary’s birth certificate says that he was born on 1st Feb 1924. John knows that that is wrong but that is what it says on all his official documents such as his pension paperwork. He respects the date for ID purposes, and respects his dad for at least getting the month correct when the Registrar grilled him! From all the available evidence, we can only guess that John was really born on or about 12th February 1924. Does it matter? What DOB would you put on his gravestone when John eventually starts his journey to Heaven? 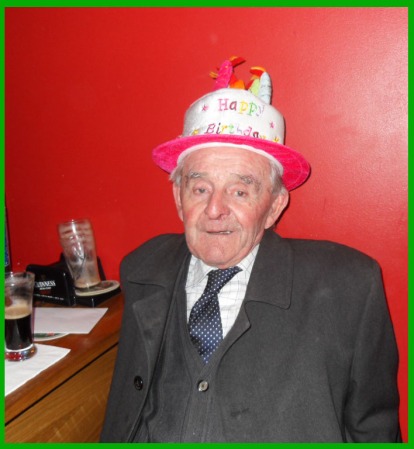 The main thing is …. doesn’t he look in rude health for a man born just after the Irish Free State came into existence.