How the name Aclare originated is thus (according to the OS Memoirs of Lance-Corporal Henry Trimble in December 1836) :

In former days there was no bridge at Aclare but a ford with large stepping stones across the river, and when flooded the people had to throw a plank across those stones to get across the opposite side of the river.

In them days there were three brothers of the name of O’Hara. Their place of residence were in three castles, two of which are in this parish and the third in the parish of Achonry, namely Ballyara Castle. The Kilmacteige castles were at Bellaclare and Castle Rock.

The eldest brother was Clare O’Hara who lived in Bellaclare (Belclare) Castle.

A in Irish is “a ford,” and the Christian name of O’Hara being Clare, A and Clare joined together to make Aclare, being the name and true origin of this market village.

I came across this wonderful publication on the Ancestry website. The official title was “Emigration Atlas 1852” by W Hughes Esq, and it was published in London for the benefit of British and Irish citizens who were considering emigrating to the faraway civilized lands of the world as established at that time, over 160 years ago. Many present-day nations were yet to be founded with the geographical boundaries we recognize in the 21st century..

The complete atlas book only stretches to a dozen or so pages, but it contains a veritable mine of emigration info of great value to readers of the day, and of course, readers of today from a historical perspective. It includes detailed maps of Canada, the United States, Mexico, South America, the Cape Colony and Fort Natal, Australia, Tasmania, and New Zealand. These were the British emigration hot-spots in the 1850’s. The maps show the primary overland travel routes to far-flung cities and new towns offering employment opportunities. The original maps were printed in color with settlements where British subjects would be made welcome shown in red outlines.

Most interesting of all (for me), the atlas contains write-ups for each destination, giving a concise description of the country, the cost of passage, the journey in miles and time, the types of workers needed at each destination, potential wages to be expected, the local cost of living, and other invaluable particulars for the would-be intrepid voyagers. 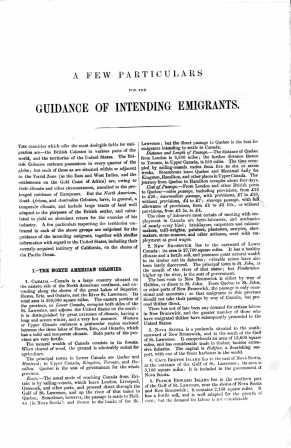 The timing of the publication means that the “newly-acquired” US territory of California is given suitable prominence. The atlas text tells us that since the recent discovery of gold deposits in CA “a continual stream of emigration has poured towards it, and continues to do so with increasing strength.” Those wishing to join the Gold Rush are offered three travel routes to get to California from the British Isles, as follows:

The author, Mr Hughes, does point out that plans are well underway to make Route Two more popular by the construction of a railway and canal across the 50 miles of impenetrable Panama forests and mountains. When the canal is completed, seafaring ships can trim 9,000 miles off the Cape Horn route. Mr Hughes was as optimistic as the 19th Century canal engineers. We now know that it took three attempts and sixty more long years to get the Panama Canal finished. This world-famous waterway celebrated it centenary last month in August 2014.

Regular followers will know that I collect old maps, particularly of Ireland or its provinces. Perhaps, more infuriatingly, I am always trying to get others to admire the beauty of the ancient craft of cartography. It is said that the island of Ireland was mapped more than any other place on the planet up until the early 1900’s. There are historical reasons for this. Some Irish maps were drawn in order to plan invasions, and others were created in order to “sell” vast portions of the countryside to foreign investors.

Check out Trinity College’s admirable Down Survey of Ireland webpage if you want to learn more about the regular mapping of Ireland, and the reasons behind this historical phenomenon.

Ireland may not possess its fair share of preserved vital records or census returns, but it can boast extant copies of maps dating from many decades of the most recent centuries.

Here is an image of one of my favourite vintage maps of Ireland, reproduced for no particular reason other than it deserves to be looked at – like a renowned work of art.

I wish I could afford the original, or an original antique copy.