Those of you who follow the latest news in genealogy research developments will be well aware that July 3rd 2014 was a momentous day in Ireland. The indices to the Republic’s civil records of births, marriages and deaths up to 2013 were made available to viewers online. It was a marvelous occasion, celebrating over 6 month’s hard work by dedicated civil servants (at great cost to the public purse), rightly trumpeted by government Ministers as a big step forward in promoting Irish ancestry to the vast worldwide diaspora. 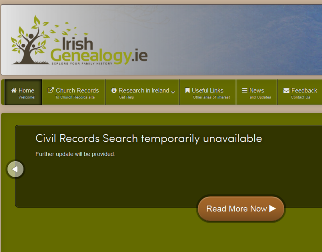 Temporarily? For over a month, and counting?

15 days later the website was closed down … by a [Nanny] State watchdog voicing concerns about data protection. Billy Hawkes, Ireland’s Data Protection Commisioner, declared that a monumental “cock-up” had occurred. It seems that one Irishman was concerned that his DOB and mother’s maiden name were now traceable via the civil birth registers, so the whole website was abandoned overnight. This unprotected public data is available to any Irish resident or visitor to Ireland who cares to venture into one of two General Register Office research rooms.

Our neighbours in England, Wales, Scotland and Northern Ireland appear to have no such concerns regarding the publicity of DOB’s or the maiden surnames of citizen’s mothers. All are traceable (for recent decades), if you know how to interrogate British government-funded websites which promote the identification of births, marriages and deaths of loved ones, relatives and ancestors.

Billy Hawkes seems to be overly concerned that some half-wits use their DOB or mother’s maiden name as their sole “password” on unidentified websites of extreme importance to the financial security and privacy of all citizens of the Irish Republic. Really? There are only two High Street banks left in Ireland, after the recent mismanagement of the nation’s economy … by the Government. Neither bank requests DOB’s or maiden names as account passwords – in isolation. Nor does any financial institution to my knowledge. Sensibly, they all have double or triple encrypted password protection for electronic account access, with at least one alphanumerical password randomly selected by the money processor, not the account holder.

Yes, we know that Facebook demands to know its sad users’ birthdays … so that other saddos can send an annual image of a cake or balloon … BUT daft gossip via social media platforms is not of national importance … IMHO … LOL … as they say on FB or similar.

Things are moving on …. yet Billy Hawkes and the Government as a whole remain tight-lipped. Thanks for spending all my income tax on a commendable genealogy research promotion exercise that you cannot agree on. Shame on you all.

Latest announcement by the Department of Heritage, Arts and the Gaeltacht

Personally, I believe that Ireland’s Office for Data Protection is very culpable in this ludicrous affair. Surely, part of its role is to oversee and guide any publicized venture that intends to make more personal data readily available to the masses. This office’s staff were fully aware of the Irish civil BMD database project, yet they stood back and then claimed to be shocked by the end result … which they did not even check out until a third party raised a minor concern. What do these nameless Data Protection officials do all day? Swap jokes on Facebook?

Billy Hawkes and his team could redeem themselves by recommending that the Irish government funds a series of public service announcements aimed at warning the less computer-savvy man in the street not to use a DOB, marriage date or family maiden name (or forename or address or phone number or bank account number, etc) as their deadly secret “password” which gains immediate entry into all sorts of private online accounts and personal files … if the ill-educated man wishes to retain privacy, of course. It’s a free world, and many social media users seem to like to share everything about their humdrum private lives with total strangers (including addresses, DOB’s, marriage anniversaries and full family details c/w excruciating photos). Then again, if such a public service announcement was made, Billy Hawkes would be justifiably accused of scare-mongering because every IT expert would point out that personal electronic banking and payment systems cannot be hacked by simply entering an associated DOB or name. 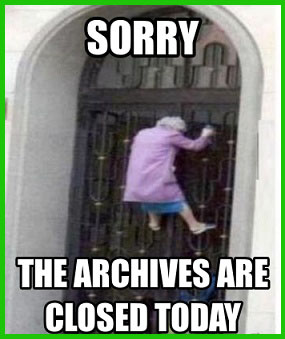 First off, the formalities. It was our Shankley’s fourth birthday on US Independence Day, yesterday. Straightaway I should point out that Shankley is a pedigree male Bengal domestic cat because a pet named Shankley appears in my genealogical thriller novel “Where’s Merrill?” in a different guise. Being a Bengal, Shankley’s 4th birthday is a significant milestone for him. He can now be classed as an adult and he is certainly refraining from starting childish daily play fights with his younger feline house-mates as was his way a year ago.

As part of the birthday celebration, we took out Shankley’s birth certificate to respectfully remember his parentage. Yes – pedigree animals have their own birth certificates – and some breeders provide documents which are far better in content than human counterparts. Take a look at Shankley’s birth cert below. Professional genealogists would be obsolete if national authorities ever started to request such detailed information when the birth of a human baby was registered. 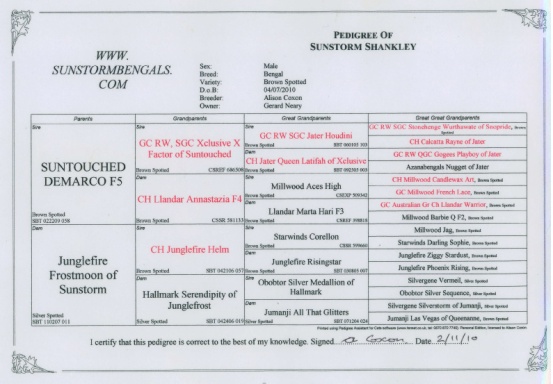 As you can see, the new arrival’s full name of Sunstorm Shankley was registered as the progeny of his named father and mother, termed as Sire & Dam. Only a few obscure places in the human birth registration world bother to record an infant’s grand-parentage – but by reference to his birth document, our Shankley can name all eight of his great grandparents, and quite remarkably all sixteen of his great great grandparents. Each ancestor is given a brief physical description, and former champion show cats are highlighted in red text. It is clear that Shankley is descended from cat royalty on the paternal side of his concise Family Tree. 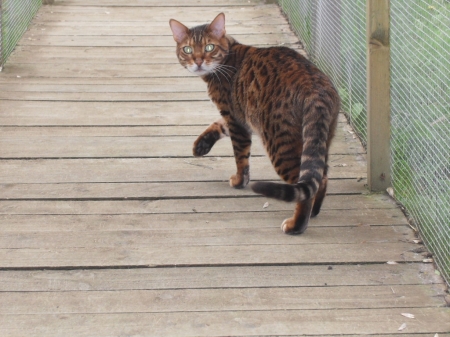 Happy birthday to Shankley and the USA

As the 20th staging of the FIFA Word Cup international football tournament finals gets underway today in Brazil, I thought it appropriate to combine my interest in genealogy with the great sport of [Association] Football – or soccer as it is known in countries such as America and Ireland where native team game players of old stole the football name before it could be copyrighted (yet perversely all other versions of football involve moving the ball by hand, mainly).

Even Football Clubs have birth certificates, strange as it seems – and some clubs are “getting on a bit.” Most established English clubs are now older than the oldest living Englishman. The FC birth cert below shows that one of England’s most successful teams, Liverpool Football Club, celebrated its 122nd birthday just last week. As with traditional vital records, this particular birth cert records the name of the proud father of the new arrival. In a bizarre twist which amuses football fanatics on Merseyside, Liverpool FC was spawned by its long-time arch-rival, Everton FC. In 1892, Everton was a popular and strapping 14 year-old. As genealogists know, in Victorian times it was quite common for teenagers to enter fatherhood or motherhood. Amazingly, LFC’s father, Everton is still going strong and rather cheekily keeps making comeback appearances which threaten to destabilize the red team’s recent domination of the soccer-mad city of Liverpool in terms of on-field success. 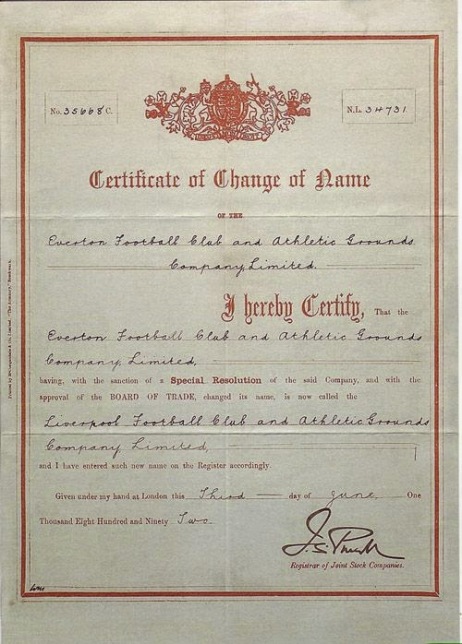 As a consequence of sharing my life with a Red Scouser, Liverpool FC have become my second favourite domestic side. I will never abandon my “first team” though, after my father dragged me along to become a spectator of my first professional football match as a schoolboy.

Ancestrally, my family developed an unbreakable affinity with Blackburn Rovers Football Club which is even older than Liverpool FC and its daddy, Everton. As the club badge shows, Blackburn Rovers was baptized as a club in 1875, although this was a delayed christening after other nicknames had been adopted and rejected by the new kid on the 1870’s football scene.

Even BRFC was a relative youngster when it came into formal existence. The honour of elder statesman in English professional football ranks goes to Notts County FC. In November this year, Notts County will be 152 years-old having played about 4,750 Football League matches. County is still capable of showing some young upstarts a thing or two about the beautiful game, although the old man has not been fit enough to compete in the top division for 20 years. “At the end of the day, the legs have gone, late in the game,” as a semi-literate TV pundit will probably say more than once during the next glorious month of World Cup highlights.

The first FIFA World Cup Final tournament was held in South America in 1930, so it’s appropriate that the same continent hosts the finale of the 20th competition. My beloved BRFC was already in late middle age by then, and County had even become a pensioner. It’s a funny OLD game.