In my work as a professional genealogist, overseas clients who are the descendants of Irish immigrants regularly relate to me the passed-down stories of why their ancestors had to leave the beautiful island of Ireland. More often than not, these tales are wildly romanticized having been created by ancestors who lived centuries ago, safe in the knowledge that their claims could not be checked out; well, not in their lifetimes anyway.

I have heard a story about a Kerryman who once lived in a grand castle until he was forced to flee Ireland as part of a honorable settlement between warring clans, thereby bringing peace forever more to his native region. Then there was the Corkonian Catholic who passed every course on offer at Trinity College with flying colours only to find that jealous business-owning Protestant families would not employ his inventive engineering skills, so he had to relocate to America to show off his talents. And I’ve been told many a yarn about numerous brave freedom-fighting Republicans who had to be smuggled out of Ireland with hundreds of British Government spies hot on their heels.

Thorough research can often reveal the truth behind the romance, although many clients prefer to ignore the unearthed evidence and stick to their fantastic family lore. The Kerryman more than likely lived in a pitiful timber shack on a bleak hillside until his heartless British landlord decided that the value of his vast Irish country estates could be increased by ridding them of quarrelsome Irish paupers. Eviction could have been forcefully applied, or at best, “negotiated” by offering the poor Kerryman and his family a handful of tickets for the next available ship sailing out of Queenstown harbour.

The Corkonian was really an uneducated and frustrated young labourer who was not permitted to attend school in rural Ireland purely on the grounds of his religion – but this man flourished as a Civil Engineer in the US when he fell under the tutelage of a kindly American benefactor who had spotted the Irish boy’s potential talents.

The hunted-down Irish freedom-fighter saga seems to have been applied to every Irish immigrant who ever broke the law of the land, centuries ago, and who decided that it was a better option to emigrate than risk serving a long, harsh prison sentence in Ireland. Many laws were unjust way back, but they were laws all the same.

I was reminded of these kinds of contradictory ancestral tales concerning romantic fiction set against bland truisms when I came across an archived newspaper article dating from 1880 which describes my remote genealogical homestead. My American cousins prefer to picture the place in the 19th century with its quaint thatched roof cottages, and the cheerful occupants always singing and dancing to the sound of flutes and fiddles, as healthy children curl up on comfy hay beds in front of a roaring fire in the hearth. The words of The Nation journalist, on the spot in 1880, paints a somewhat different picture … as I always suspected, but could never prove until now.

The reality for the vast majority of rural Irish Catholics over decade upon decade before 1900 was a life lived on the precarious edge of breadline poverty. Poor Irish folk died in their thousands as a result of starvation, even outside of the recognized Famine years. Many, many more suffered with prolonged disease and fever. Most homes would be classed as uninhabitable today, with no sanitation or even running water. The bare-footed Irish paupers of yesteryear often slept next to their livestock for warmth, all housed within a filthy shack called “home.”

My 19th century ancestors drifted down from the barren and windswept Ox Mountains to take leases in the boggy townland of Tullinaglug. To them, it must have seemed like a step up from the very bottom of the social ladder. They survived the Great Famine, only losing the weakest children to hunger and undernourishment, and battled on throughout the following years of nationwide economic depression. Some of the extended family had to up and leave for America; there was not enough space for all to exist on the small farmstead in Tullinaglug. Without knowing it, the US emigrants were to become a Godsend for the survival of their kin back at “home.”

By the winter of 1879, after another year’s crops had failed, the Sligo natives were in the midst of another “mini-famine” which became known as An Gorta Beag in the Irish language. No food meant no income, and the poor tenant farmers could not meet their extortionate rent demands. Rather than provide some economic assistance (or abatement), the landlords of Connacht insisted upon full payment of overdue rent or legally enforced eviction. That was all the thanks my folks got for turning worthless swamp, which scarcely afford footing for snipe into much improved farmland. If it wasn’t for the occasional gift of a few Dollars sent home from American relatives, I am certain that my great-grandparents would have starved to death, and my grandfather Ned (and all who followed) would never see the light of day. 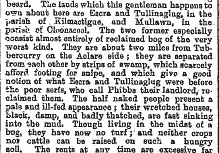 To legally evict tenants who fell behind with rent payments, a landlord (or his representative) had to commence a legally-backed “process” wherein the defaulting tenant was served with a notice setting out the terms in which he or she must pay monies owed, or vacate the ramshackle premises immediately after further default. In Tullinaglug, the landlord Phibbs demanded full payment within days … or else!

And so it was that on 7th January 1880, Mr Phibbs, accompanied by 60 policemen carrying muskets with fixed bayonets, set off from Tubbercurry to “process-serve” in Tullinaglug and Escra (aka Eskragh). There he saw his loyal hard-working tenants half-naked, pale and ill-fed, in the words of the journalistic observer.

Their wretched houses black, damp, and poorly thatched, are fast sinking into the mud.

(as attempted by the residents of neighboring Curry parish in the same newspaper Process-serving report of January 1880). The Sligo serfs made a peaceful but noisy protest – yet the more bloodthirsty police constables still could not resist striking out at defenseless, even heavily pregnant, women:

A little girl named Stenson was knocked down senseless, and a poor woman named Mary Walsh, on the eve of her confinement, was stunned by a blow from the butt end of a policeman’s musket, and remained unconscious for some time.

This is all a far cry from the Americanized vision of the twee life of villagers in dear auld Ireland. Now you know why America was seen as a last desperate place of sanctuary. Now I know why my grandfather Ned took my family to a damp but much pleasanter home in England. Four of Ned’s eleven siblings were born before Mr Phibbs insisted on slipping a very threatening court eviction notice under the Neary’s cottage door.

For those that can stomach hearing more about the horrors endured by their Irish ancestors, the full-page report of just a few examples of Process-serving is accessible by clicking on this link: 1880 The Nation (PROCESS-SERVING IN THE WEST)

1 thought on “Not-so-romantic Ireland of old”