Over the next few days, I am going to treat you to a unique Tour of Ireland captured on 61 marvelous photographs taken in the summer of ’61. This was the Parker family’s holiday album, and it has been kindly shared by Gordon Parker.

Gordon was aged about 15 years when his parents, John & Lily, carefully planned a road trip tour of Ireland as their summer break. Considering that the family was based in North London, with no Irish connections, this was quite an adventurous plan for the time in question.

What makes this family holiday interesting for us is that Lily Parker had developed a keen interest in photography, so the whole tour was captured on Kodachrome II – a new camera film introduced specifically for the burgeoning colour slide market. I am no photography expert, but I find that the old slides are  quite unique and rich in warm colours, and they avoid the glare of modern digital snaps.

Thankfully, Lily’s son, Gordon Parker, has now painstakingly converted each 1961 slide into a 2014 digital image – so we can all re-live the highlights of the Parker’s 1961 summer holiday.

As with all family holiday shots, the majority of Lily’s pictures were scenic landscapes (which rarely change over the decades), but she did manage to capture several images of everyday Irish life from over 50 years ago which are very special, and which will bring back memories to many.

The Parkers route plan took them straight to the west coast. As with most Irish holidaymakers today, the vacation only kicked off in proper style when their car reached Kerry, arguably Ireland’s most scenic county. Lily did not take out her precious camera until the family had spent a night in Killarney.

Her first shots of her husband and son, and two street scenes in Killarney town, are tentative and relatively normal. It seems like Lily needed to see the Lakes of Killarney to kick-start the creativity of her subsequent photographic images.

As you will see over the coming days, Lily Parker captured many, many special images of “dear old Ireland” in 1961. 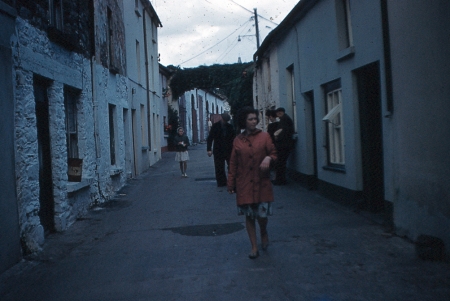 Everyday life in Killarney in 1961

Killarney Cathedral (through an alley)

The Gap of Dunloe (from Killarney) 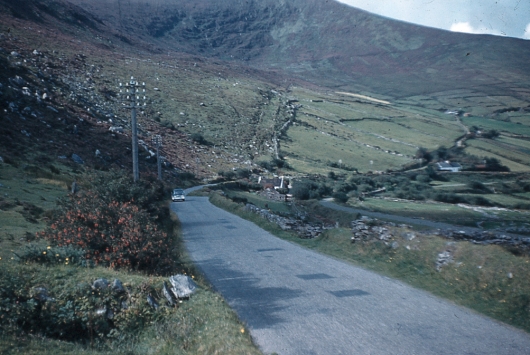 The Gap of Dunloe from below Moll’s Gap, County Kerry