Family history researchers can build up a realistic mental image of ancestors they never met if the ancestors in question featured now and again in local newspapers, and if these contemporary articles were preserved and can be found in newspaper archives. The news stories might just be local trivia, or you might get lucky and find tales of involvement in major incidents and even alleged crimes. The journalists of old had a tendency to describe the physical appearance of the persons being reported on, and sometimes these hacks would also arrogantly assess (in their biased opinion) the personality of the characters in a newsworthy story. The wealthy friends of the press of yesteryear were always fine, upstanding pillars of the community, and the common hard-working labourer was generally to be viewed with suspicion, regardless of his faultless life to date.

You can get even closer to a long-gone ancestor if you are fortunate enough to discover that your deceased relative made a Will prior to death. The retrieval of a probated Will can often reveal a list of the most valued personal effects of the person in question. You can also get a clear insight into which family members or friends of the deceased were truly respected, and maybe also those associates who were to be taught a lesson with derisory bequests.

In this regard, the research into the relatives within Merrill’s extended family unearthed several Wills which, in the main, simply confirmed the mental pictures we had built up of the more crucial characters. For instance, we know that Uncle Hubert Forster was a country sports fanatic from both newspaper articles and the fact that he left his prized fishing tackle and rifles to his nephew Horace. He also gave the younger generation of Forsters first refusal to take over ownership of a very trendy automobile (in its day), this being Hubert’s classy Pierce Arrow car. A photo of a surviving model is shown below. It is not beyond the realms of belief to imagine that a certain upwardly-mobile young businessman from Mason City might have taken a great interest in a valuable car going for a song.

As such, Hubert’s former car becomes the vehicle of choice in my novel for Merrill Harrison, the husband of Hubert’s niece. 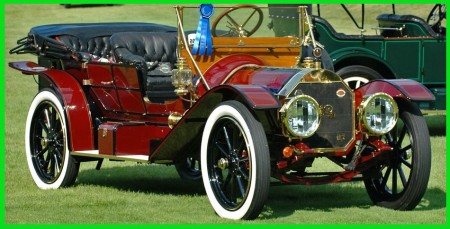 A great car in which to race a Ford Model T

In a similar but much more poignant vein, we also discovered through Wills that the ladies in the Forster clan had a love of Hudson Seal fur coats and accessories. Whilst these fashion items are not so politically-correct these days, an expensive fur coat would have been treasured in the early decades of the 20th century. When the owner of a Hudson Seal Coat passed on, you can be sure that their fur coat passed on too, usually as a bequest to a favourite younger female relative. It was only when we studied again the beautiful portrait photo of Merrill’s young wife, Madeline Forster, that we realized that she was wrapped in an elegant fur stole – perhaps one of the very same Hudson Seal creations mentioned in her relatives’ Wills. 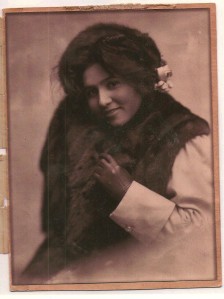 We hope that Madeline’s daughters also got the chance to parade around in fur for a while, later on, as unbeknownst to them, Merrill was chaotically frittering away family finances, chasing his own selfish dreams of eternal wealth.